Towards the end of his life, Lord Buddha visited his mother in Trāyastriṃśa heaven – one of several celestial realms in Buddhist cosmology. She died when he was young, before he discovered the path to enlightenment. In gratitude for giving him life, he wanted to give her the opportunity to convert to the Dharma and become enlightened, thus ending her cycle of suffering and rebirth. The three months he spent in heaven teaching her the Dharma mark this period of Buddhist Lent.

The day of Awk Phansa occurs on the first full moon of the 11th month of the Thai lunar calendar. Marking the end of the three-month period of Buddhist Lent, it commemorates the day when Lord Buddha returned back down to the earthly realm. Locals in both Thailand and Laos believe that a mighty Naga serpent, the Phayanak, resides in the Mekong. During the night of Awk Phansa, to the delight of thousands of onlookers it winds its way through the Mekong’s dark waters, spitting glowing fireballs which rise high into the air, welcoming the Lord Buddha back to earth.

We arrived in Nong Khai on October 2nd, just in time to experience the five day festival surrounding this mysterious event. On the afternoon of Awk Phansa (this year falling on October 5th) we joined several other residents of our guest house for a drive 60km east of Nong Khai town, to sit along the banks of the Mekong in the hopes of catching sight of the Naga’s fireballs. There was no guarantee. They might appear only in small numbers or not at all.

We set off at 3pm after a morning of heavy rainfall.  We bought rain ponchos at the 7/eleven, we bought a plastic picnic mat to sit on, we bought a large bag of banana chips for the drive. We were prepared. As we drove the hour and a half eastwards, the sky cleared and the sun came out turning the world into a sunlit hot-house.  Reaching the small village of Ban Nam Pe, an extraordinary sight awaited us. Rising high over the banks of the Mekong a massive Disneyesque lotus flower dominates the landscape. Its size alone makes it impossible to miss; even so, its candy-coloured exterior of blues and pink, the shining gold, is sure to draw near any curious eyes seeing it from afar.

The giant lotus was built by a controversial Buddhist sect who’s head monk is currently on the run from Thai authorities, accused of defrauding followers of millions of bhat by encouraging them to give large sums of money to make merit. 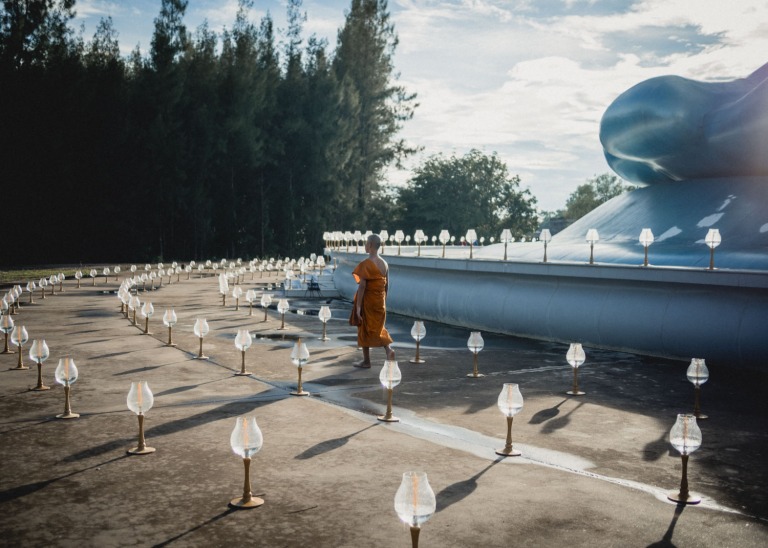 This was not our destination however, so we hopped back into the minivan and drove around the corner. We were by no means alone. The large school parking lot nearby was filled to capacity already.  Fluorescent-baton wielding Thai traffic police were blowing whistles and signalling lines of cars to alternative spaces. We parked, then wandered down towards the river following the crowd. Food and drink stalls lined the road as groups of Thais streamed past carrying mats, umbrellas, children, and chatting happily amongst themselves. We reached the riverfront where a market lined the paths and the banks of the Mekong were lined with groups of families and friends relaxing under parasols to try and escape the late afternoon sun. 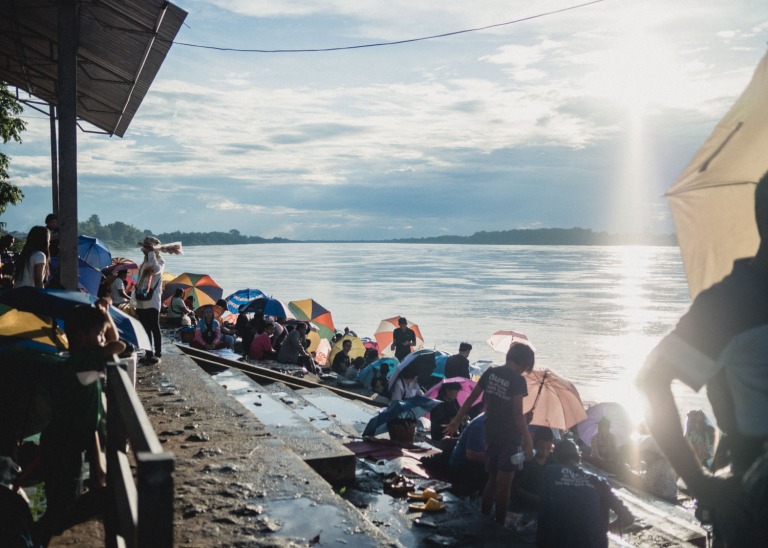 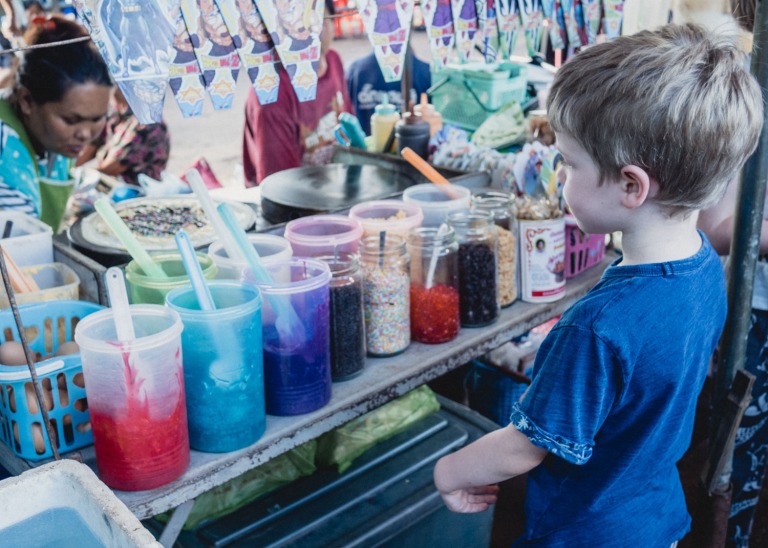 We meandered through the stalls, bribing the kids with chocolate-sauced and candy-sprinkled crepes for good moods. We found ourselves a spot on the riverbank, set out our mat on the mud-covered concrete, bought a random assortment of foods from the stalls, and snacks of green mango and caramel popcorn from passing saleswomen. And we waited.

We watched the sun set over the Mekong as crowds continued to gather. Dusk was approaching and with it the chance to spot the mysterious Naga Fireballs we were all here to see. We waited.

Darkness fell, paper lanterns rose quietly into the sky, streaming upwards from spots up and down the river. The Laos waiting on the opposite bank set off fireworks and bangers, and the Thais responded in kind. And we waited.

Suddenly there was a commotion from the Thais around us – shouting, pointing. Clear excitement at having spotted something. We saw nothing. A few minutes later the same thing happened. The locals had definitely seen something. Still we had seen nothing. We looked at each other confused. Were these fireballs invisible? Imaginary? We continued to wait, bemused.

Finally it happened. The fireballs appeared again, several of them rising up into the sky one after the other. This time we saw them. Now we understood. The fireballs rose sporadically through the evening, in small clusters or two, three, five. It was a very lucky year – apparently we saw more that evening than have appeared in many years combined.

When someone tells you that a ball of fire will rise from the Mekong river and float high into the air, you develop certain expectations.  An image forms in your mind. Something rising from the actual surface of the river. You wonder how it could be possible. You consider a hoax, but deep down you hope to see something confounding explanation. Or at least to be fooled convincingly. I’m a cynic but I wanted to be amazed. In the end I was amazed, but not by the fireballs. I was amazed at the reaction of the Thais, as they whooped and cheered in excitement, counting each ball as it rose into the air. Their belief in what they were witnessing.

For myself, I witnessed not supernatural balls of fire rising up from the waters of the Mekong, but small balls of reddish-pink light that shot up quickly into the air from a forested area on the Lao side of the river. Balls of light which looked suspiciously like small fireworks, or flare gun shells. I admit, I was a bit disappointed.  I think Chloe was expecting something more impressive too, considering she saw the first bunch then asked if she could get her kindle out to read. Apparently one fireball was enough for her.

Putting the fireballs aside though, it was a fun evening out and we enjoyed ourselves. The atmosphere was festive yet relaxed, and I’d still recommend going and joining in the festivities if you are in the area during Awk Phansa. Think of it as less about going to see mystical Naga Fireballs yourself, but rather about going to watch the Thais seeing the mystical Naga Fireballs. Because that’s just as fun.

All content including images © Leigh Eros. Not to be reproduced without permission.