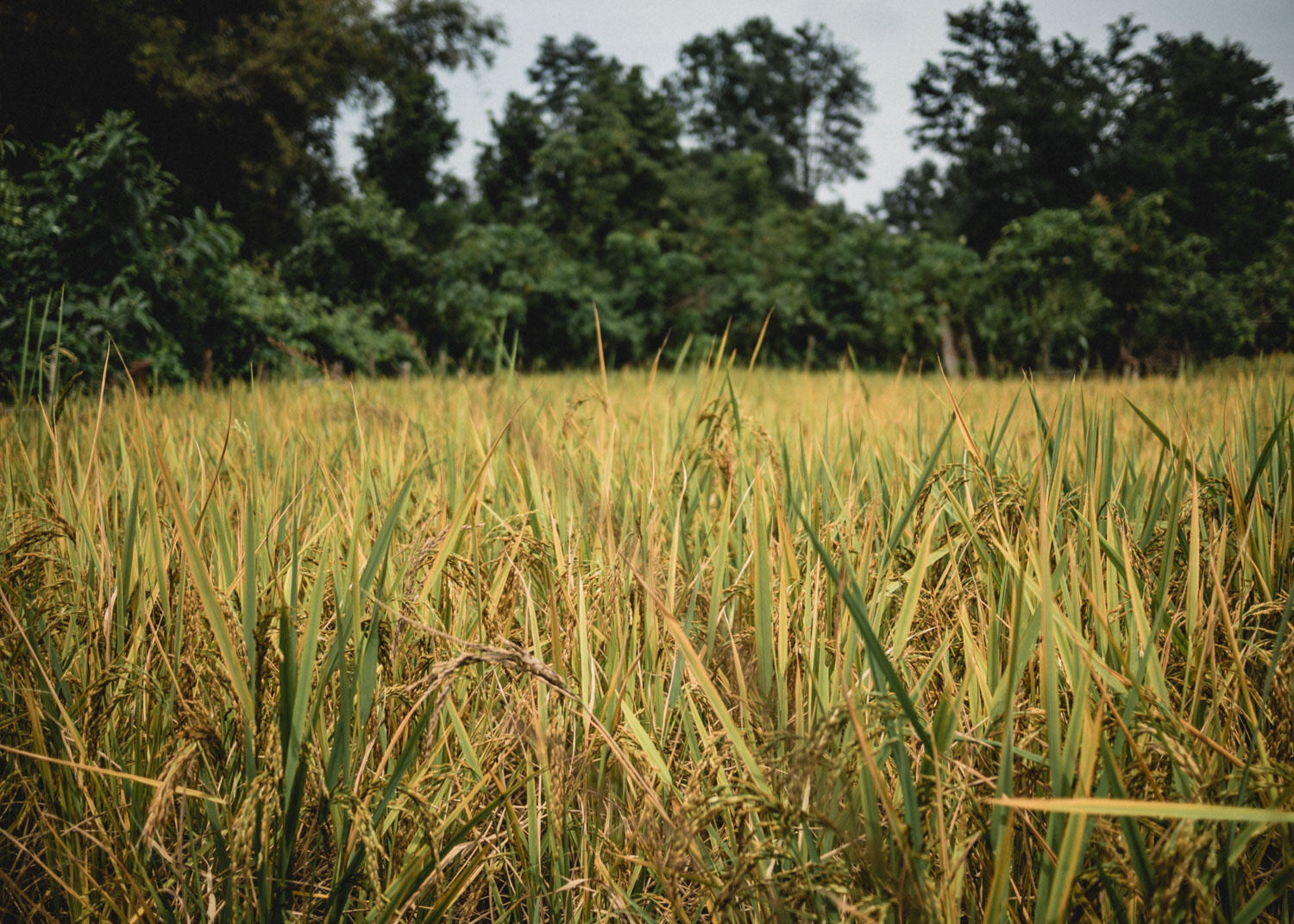 Mr. Hook (also nicknamed Captain Hook, for reasons I can’t discern – he has both hands and there isn’t a pirate ship in sight…) lives in an ethnic Katu village in Ban Kok Phoun Tai on the Bolaven Plateau. On day three of our Long Loop motorbike tour, we decided to pay him a visit.

We pulled off the main road from Ban Beng to Paxsong, and were gestured over to a lone building where we were asked to pay a village admission fee of 5,000kip to help support its development. The villager who took our money pointed vaguely down a dirt track, shooing us in that direction. We drove over the bumpy red earth and soon came upon stilted wooden houses and a gang of village men doing roadworks, which consisted of half of them sitting along the side of the road on their haunches while the other half shovelled loose dirt over the road, smoothing over the rutted track. We slowed down, uncertain where to go, or if we could even pass. They stared at us with neutral expressions. A woman walked by with a child on her back in a sling. She stared at us with a hard, unsmiling face. We smiled and greeted them in Laos with a “Sabai Dee!” They stared at us some more. We were starting to feel a little unwelcome and not entirely sure we were in the right place. We said, “Mr. Hook?” and the woman with the baby dismissively pointed down the road the men were working on. We drove further down a village track and saw a sign pointing us down a narrower one, where I wedged my bike in a deep rut. I told Ben to get off, then extricated myself and the bike as three toddlers stared at us from a gateway.  A 100m or so further down the track and we eventually arrived at Mr. Hook’s house to a friendly welcome from a couple of men and women hanging out at some tables underneath the stilted dwelling. The smiles were a welcome change from our village experience thus far. One of the women asked if we wanted a tour, which we did, and she told us Mr. Hook had just recently left with some other tourists. Luckily they weren’t far and after she phoned him to find out his location, she marched us over to join the group.

We arrived to find Mr. Hook explaining all the various uses for coffee. He is very enthusiastic about coffee. If you thought all you could do with it is drink it, you’re woefully mistaken. Yes, imbibe it to your heart’s content; he reeled off a whole host of health benefits from doing so, but once you’ve finished your drink there are many uses for the old grounds:

I’m sure there were more, we missed some of the talk before we arrived. We continued on a walk in the areas surrounding his village with Mr. Hook showing us various leaves and plants with a myriad of uses. A leaf that is scrunched up and mixed with water for a homemade hair conditioner, a berry used as an anti-diarrhoea medicine, a plant stalk that is chewed to help clean the teeth, a leaf-whistle for secretly calling a girl out to talk to without her parents knowing who you are, tree sap and a twisted vine made into a homemade bubble blowing kit – a big hit with the kids!

It was fascinating stuff, but the most interesting part of the tour, and the most culture-shocking, was talking to Mr. Hook about his life and life in a Katu village.

The Katu people are animists, one of the oldest known type of belief system in the world. They hold the belief that a spirit exists in all things – plants, rocks, animals, rivers, mountains – not just in human beings; that there exists no hard boundary between the physical and the spiritual world. Spirits are both benevolent and malevolent, the latter being believed to possess people, causing illness and bad luck. They believe in Shamanism, and Shamans are consulted in many aspects of life, including the naming of a child and the interpretation of dreams.

The Katu have a mon-khmer language of their own and most villagers do not speak nor understand Laos. This inability to understand the language spoken around them leaves them isolated in their community and they fear leaving it. They believe that outsiders might put a black curse on them which would eventually kill them, if they leave their village. Many will not step outside the village and surrounding farming lands their entire lives. Education is almost non-existent with villagers believing that the Earth is flat; that what they see on TV is real (they don’t like watching violent shows because they believe the violence is really happening to someone); that we have pale skin because we don’t need to work and drink a lot of milk; that Africans have dark skin because they work hard and live on higher ground, closer to the sun; that someone has a longer nose because they eat a lot of bread; that cameras can steal pieces of your soul.

Mr. Hook is an exception. He is an educated man who studied at University and does work with local NGOs. He left the village when he was a teen. He says it was because he’s lazy and he didn’t want to work, so instead left to go get an education. He and another member of his family were the first to ever leave his village. His parents tried to set him up with several arranged marriages, two of which he got out of by convincing his brother and his cousin to marry the girls instead. The third time he wasn’t so lucky.  He was tricked back to the village when his parents falsely told him his Grandmother was dying and he had to come home to say goodbye. He returned to the village to find a healthy Grandma and a wedding ceremony and bride ready and waiting. He couldn’t dodge the bullet a third time. However, while out in the wide world Mr Hook had had sex with a western woman and the villagers believe that because of this he carries bad luck. He lives on the outskirts of the village and the rest of the villagers have as little to do with him as possible, only speaking to him when necessary lest his bad luck infect them. He isn’t even allowed to leave the village anymore because when he left on two other occasions, he had sex again and they found out about it. Now his family don’t trust him and always keep an eye on him and will physically stop him if he tries to leave.

The village practices polygamy, with children often being married off at as young as eight to nine years old. It isn’t uncommon to see pregnant 13-14 year olds. Men can have multiple wives if they can pay the dowry, and a woman is unable to decline an offer of marriage. With multiple wives and their children, as well as multiple generations living together in one house, dwellings can get rather crowded. Mr Hook pointed out one house in which sixty-nine people live. I had to ask him to repeat it just to be sure he hadn’t said sixteen. Nope, sixty-nine! This was not a large house. Another held seventy-two, he mentioned casually as we strolled past.

The villagers frequently smoke from large bamboo bongs, holding a mixture of tobacco and sugar cane. It is believed that smoking this drives out evil spirits, so if you’re a good parent then you will hand your child a bong at the age of three or four. Some kindly men offered a bong to Ben, an offer that was politely declined.

During the tour we walked towards a field of rice and as we did so, Mr. Hook implored us not to touch the rice plants. If we were to do so, it would release the good spirits from the rice thus taking them away from the villagers.

In the forest we walked past the Women’s Cemetery. This is where women are buried, and also were they go to give birth. A labouring woman will leave the village with a friend or a woman from her family, and live in the cemetery in a makeshift shelter while she gives birth, and for 10 days afterwards. After this time she will return to the village with her child, and step over a symbolic fire that the men of the village have built to cleanse her and the baby of any evil spirits. Before she can enter her home her husband will ask her if she has brought him a “good” baby or a “bad” baby.  If she answers “bad”, the baby will be disposed of. Apparently that never happens, women always say they have a “good” baby. If the woman did not survive childbirth, she would be buried in the cemetery, upright over a period of three days. On the first day she would be buried to her knees, on the second to her chest and on the third her head would be covered. This is done as a cleansing ceremony to prepare her to go to Heaven, which happens to be the Moon. If you tell the villagers that men have stood on the surface of the moon, they won’t believe you.  After all, how can an earthly man travel to Heaven and back? There are two other village cemeteries, one where you’re buried if you die of old age or disease, and another for those who die from an accident. If an accident befalls you it’s believed you had an evil spirit in you, and that the rest of your family could likewise be cursed. So as not to harbour bad spirits in the village, the whole family of the deceased has to leave the village and live alone out in the forest for five years, not stepping foot in the village for all that time. Five years. After those five years have passed, the family may return to the village and build a new house on clean ground; their old house having been pulled down years ago by the villagers.

Animal sacrifice is regularly practiced, with a cow being slaughtered to mark the end of the debt once a dowry is paid in full. Animals are also sacrificed during ceremonies to mark important events such as at the end of the rice harvesting season. He told us that a puppy would be kicked to death by the whole village in some ceremonies, with villagers finding it an honour and good luck to have their animal chosen. It was shocking, to say the least. There I was trying to distract my 7 year old child, and avoid answering her questions such as, “Did I hear him say something about a puppy?”

By the end of our time with Mr. Hook I had a lot of respect but at the same time felt pity for a man who is clearly well educated, yet whose life has been constrained by the beliefs of those around him. People who to a large degree control his life, while at the same time shunning him within his community. To feel unwanted, yet not to be able to leave.

The Katu way of life and their belief system is so radically different from my own that I was left not quite knowing how to process our visit. Our time in and around the village had been fascinating and I was very glad we’d decided to stop by, yet I was deeply uncomfortable at the same time. I felt very much the outsider, and that much more than simple geography and language separated my world from theirs.