We find ourselves with an extra day in Kathmandu because we’ve decided to tough out the bus trip to Pokhara in one go, rather than split it over two days. So, some time to sight-see. I ask myself what the kids will find interesting because let’s face it, if the kids are bored no one else will have any fun either. I come up with a few options:

Durbar Square? On the one hand, it is supposed to be a beautiful historical site with traditional style buildings which I’m sure would photograph beautifully. On the other hand, it’ll cost us $30 to get in and to the kids it’ll be just a bunch of boring buildings. Pass.

Pashputinath Temple? This is a very important Hindu temple on the river where open air cremation ceremonies happen on the ghats. I’m interested in seeing it, but I wonder if it’ll be a bit to real for the kids. I’m torn, but the $20 it would cost us to get in seals the deal. Again, pass. This time. We’ll be back to Kathmandu and I might sneak off to this one on my own.

Swayambhunath Stupa? One of the holiest prayer sites in Nepal, it sits atop a hill giving panoramic views over Kathmandu. The stupa’s eyes look pretty cool to kids and it’s a walkable distance from our hotel. It’s also known as the “Monkey Temple”. Because of the monkeys. There are lots of steps to get to the top, but there are monkeys to compensate for that. It’s also cheap. Like us. That’s settled then. But you probably already guessed that from the post title, right?

We walk for forty minutes through dusty streets, piles of rubbish and rubble everywhere. Spaces stand empty between buildings where others sat before the earthquake shook them down. Dogs lie sleeping in gutters and alleyways while chickens peck the ground around them. A group of children down by the river holler “Namaste” and wave up at Ben and Chloe as we cross the bridge above.

Colourful clothing is strung out to dry along balconies and between buildings, echoing the prayer flags flapping in the wind nearby.

Men with grease-blackened hands work on motorcycles in small roadside shops; women in bright red saris trimmed with gold squat on the kerb selling roasted peanuts and looking after toddlers who shyly greet us as we pass. An old woman, bent over her crutch limps past us down a lane, hand on her aching back. Cars honk and we flatten ourselves against the wall as they stream past. 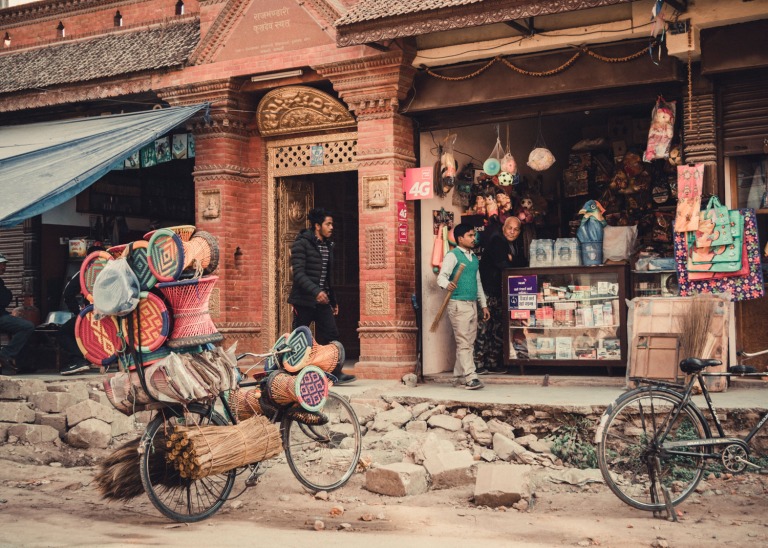 We reach the bottom of the staircase leading up to Swayambhunath. A local sitting under a tree calls over to us and tells us to put away the packet of biscuits that has been sustaining Ben’s endurance these last forty minutes. The monkeys you see, they will grab them. The biscuits are stashed and we head up the steps.

Half-way up, the complaining starts. They exclaim that “there are a lot of stairs!” Yes, I agree there are. Ben’s “legs are tired“. Not as tired as they are going to be in three weeks in the Annapurnas, I think to myself.  I don’t actually say that, instead I spew out some platitudes and point at a monkey. When we near what looked like the top of the steps, I realise that we’ve only reached a middle landing and there are more steps to go. Steeper steps. Lots of them. Look kids, more monkeys!

I watch Alex and the kids climb up in front of me, and beyond them I see the golden face of Swayambhunath rising before me, prayer flags streaming from its glittering spire.

I reach the top, breathless, calves cramping. A stream of bodies flows past me. The devout spin prayer wheels as they complete clockwise circumambulations of the stupa, the sound of dozens of voices chanting Om Mani Padme Hum rising through the air. Monkeys dodge in and around feet as they scramble for rubbish and scraps of food, stealing from anyone foolish enough to be holding some unguarded. Shopkeepers and stalls sell all manner of curios, jewellery and religious items. 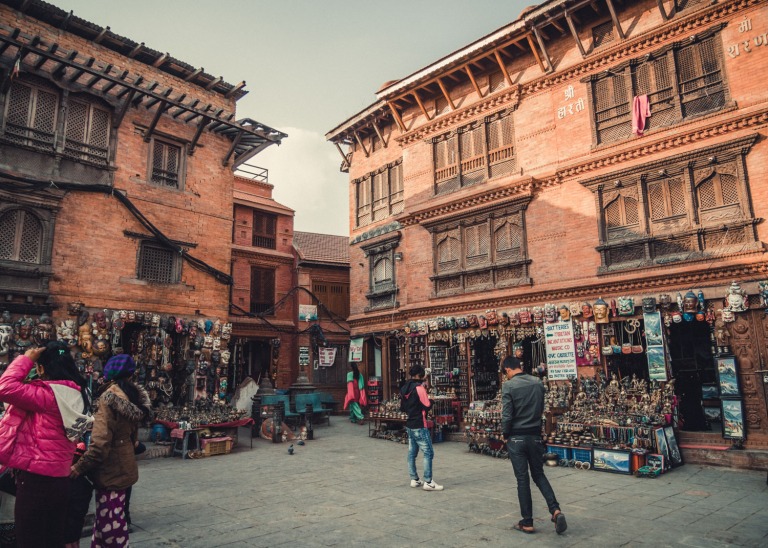 There is colour and activity everywhere and in the centre of it all sits Swayambhunath, its white dome rising wide from the ground, Buddha eyes gazing from atop on each side of its golden face.

It’s a beautiful site, I want to explore every inch, suck up the ambience, find interesting compositions for my photographs. But I feel guilty leaving Alex to look after both kids on his own in a bustling place where they want to run off in different directions, chasing puppies and monkeys. I’m torn between being a photographer and a mother and end up doing a half-arsed job of both. We wander around to the limit of Ben’s patience while I hurriedly snap the same pictures everyone else does. I squeeze through a crowd of people to gaze down over Kathmandu, monkeys standing sentinel on the wall before me. 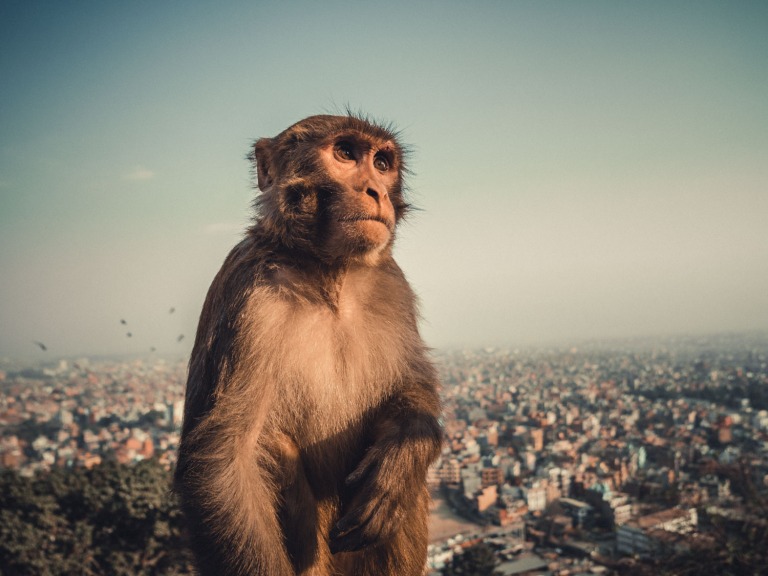 It’s late afternoon as we descend the stairs, the light softens and takes on a pinkish golden glow. The photographer in me wishes she could stay for the perfect light, but reality kicks in and it’s time to go. We briefly consider walking home, but seeing as Ben is almost asleep on Alex’s shoulder we opt for the $3 cab ride instead. Sometimes you have to treat yourself!

One thought on “Swayambhunath Stupa”