Wow, I’m waaaaaay behind here.  We left Cambodia on November 9th and I can’t believe we’ve been back in Thailand almost three weeks now.

We decided to DIY the journey rather than book a direct bus from Battambang all the way through to Bangkok – a journey which can be done in one long, long day on a bus (or two or three, as is often the case regardless of what is advertised). Our final destination was Chiang Mai, in the north of Thailand. Since time was on our side and with the kids in tow, we decided to break the trip up into a three day & one night journey.

Departing Cambodia, we left Battambang early one morning by bus with Capital Tours and after a rest stop and change of buses at the crossroad town of Serei Saophoan, we headed to the the Poipet-Aranyaprathet border crossing – one that is rather infamous for delays, confusion and corruption. In the end I was pleasantly surprised at how easy it all was; perhaps because we were going in the Cambodia – Thailand direction rather than the other way around where scamming appears to be more common.

Capitol Tours dropped us off about 50m from the border and we walked in the midday heat through throngs of cars, buses, vendor stalls and bodies to a building with a large “Departures” sign. We entered the building and got in line with everyone else. Twenty minutes later we were stamped out of Cambodia, no “stamp fee” a.k.a bribe needing to be paid, unlike at the Laos-Cambodia crossing we’d done a few weeks earlier. After that it was a hot walk through no-man’s land to the Thai side of the border where we were helpfully directed to the appropriate forms and queue. We were lucky that day, it mustn’t have been too busy because we were queuing inside the building rather than outside it, as can often happen. Regardless, it still took us about an hour and a half to make it to the front of the line where we were brusquely stamped into Thailand for the next 30 days.

Exiting into the Thai side of the border we picked up a tuk-tuk for 80 Baht to the nearest town of Aranyaprathet where I’d booked a night at a motel. That’s right, they have motels in Thailand, real proper ones with car ports in front of every room. We may not have had our own vehicle but it still felt apt for this journey that we were taking by minivan, bus, tuk-tuk and train. Aranyaprathet is a quiet border town that doesn’t see many foreign tourists so very little, if any English was spoken. But people were friendly, and my minimal grasp of Thai along with some YouTube pronunciation videos were enough to get us by. As with most Thai towns a nightly food market set up around a square in the middle of town and it was refreshing to sit on some plastic chairs at a metal table watching fountains spring up from the pond nearby as we munched on cheap, scrumptious food that we didn’t worry might make us sick. I’m not usually one to avoid street food, but I read so many accounts of the need to be much more circumspect about food from street vendors in Cambodia than in other Southeast Asian countries, that we didn’t feel so confident ordering from them. There was definitely a feeling of relief at being back at a Thai market, even if a stall burst into roaring flames in front of me as it’s gas line caught fire! I mean I might get blown up, but at least I wouldn’t get food poisoning.

The next day we got up early and headed to the Aranyaprathet train station at 6am, ready to buy tickets for that day’s 6:40am train to Bangkok.

We hoped to buy some second class tickets where seats are like the kind you find in a bus – individual and reclining in an air conditioned chill. However despite what the Thai railways website might have said about available classes, there was only one class on that train. Third. Fixed bench seats in fan cooled compartments (if the fan works). At least it was cheap – 140 baht for the four of us – and the seats were padded, which is not always the case.

If you’re curious, no the fans did not work. At least the windows opened. Alex wasn’t hugely impressed, being tired and a bit stiff the seats gave him an aching lower back. I didn’t mind though, and it was interesting to watch the train fill up as we moved past station after station with locals carrying baskets full of wares to the nearest market, or children on their way to school for the day. The scenery was beautiful and the seven hour journey, while long, wasn’t unpleasant. 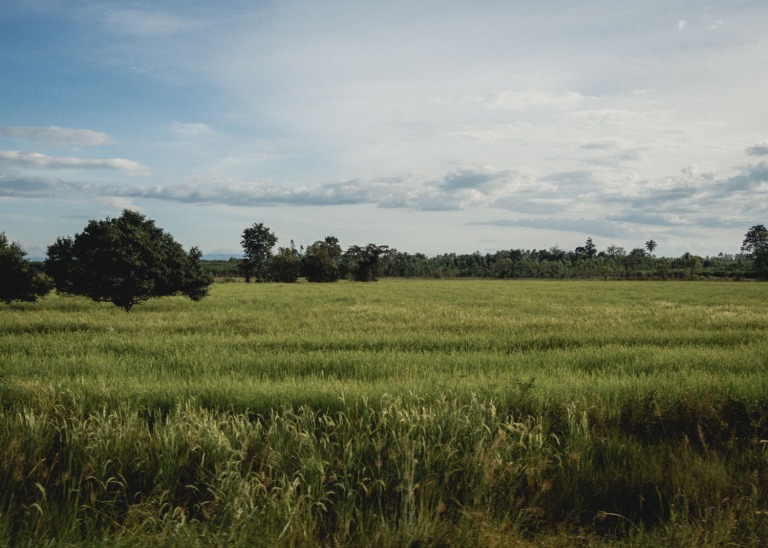 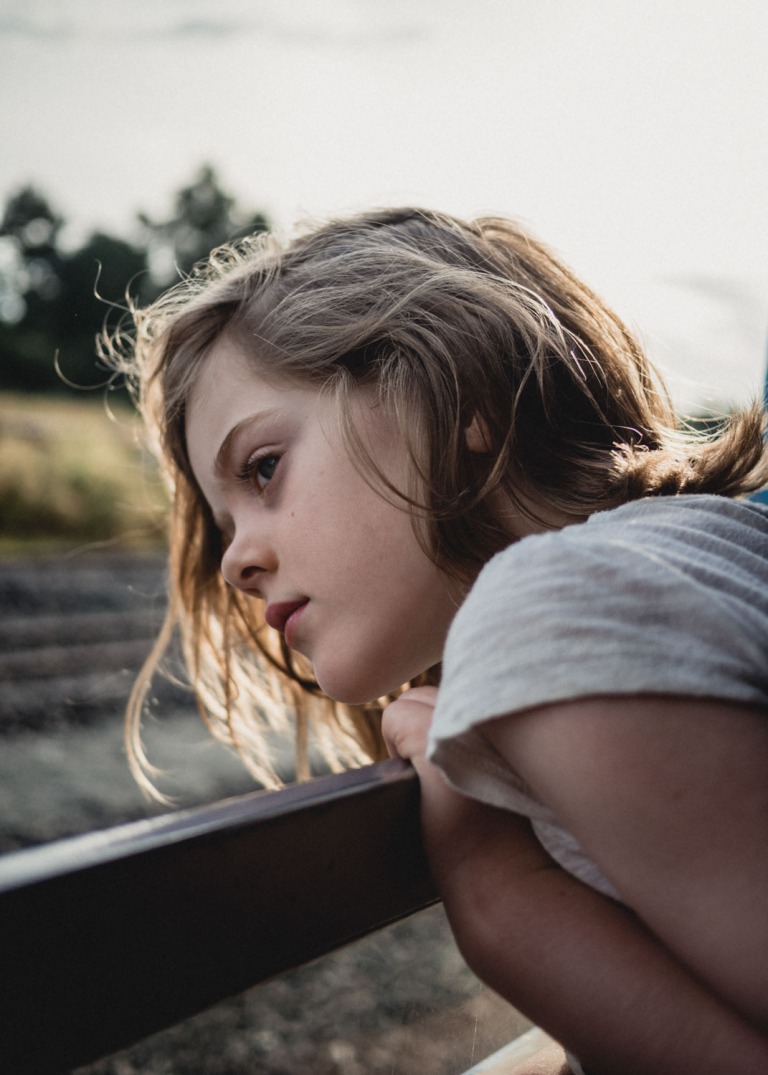 We arrived at Bangkok’s Hualumphong station early afternoon and headed to the nearby hostel I’d booked, Loftel Station Hostel. Despite all my travels in Southeast Asia, staying at a hostel was a first for me. But really, it was the only option if we wanted to pay anything close to 1,000Baht/night, everything else cost way more. Despite having to share bathroom and shower facilities, we at least had a 4 bed dorm all to ourselves – we didn’t feel subjecting other travellers to our children for the night would be overly fun for anyone! We were really pleasantly surprised with our stay. The place was spotlessly clean, the beds and pillows super comfy and the staff friendly and helpful. It opened up some new flexibility in our minds about accommodation options and there would be more hostels in the future, that was for sure.

The next day we checked out of the hostel at midday then spent the afternoon at the MBK Mall – it was raining so we gave the tourist sites a miss. We were killing time until our sleeper train up to Chiang Mai left that evening. The kids, as ever, were overly excited about sleeping on the train and enjoyed every minute of it. That was our fourth sleeper of this trip and it was interesting that it was the first one we’ve been on that was full of other Farangs. On the others we’ve mostly shared the train cars with locals, but the BKK-Chiang Mai route was certainly packed full of tourists, and was definitely the rowdier for it. As always, Ben made friends and chatted away to all the young twenty-somethings surrounding us, whether they were interested in his discourse or not. I’m not sure how much they really cared to be excitedly told that he could climb up and touch the ceiling, but he was certainly keen to let everyone know!

I woke the next morning to watch the sun rise through mist-covered northern scenery – palm trees having given way to jungle clad hills and valleys. Small purple flowers adorning green vines that climb up telephone poles and loop along the wires. Even the occasional golf course. 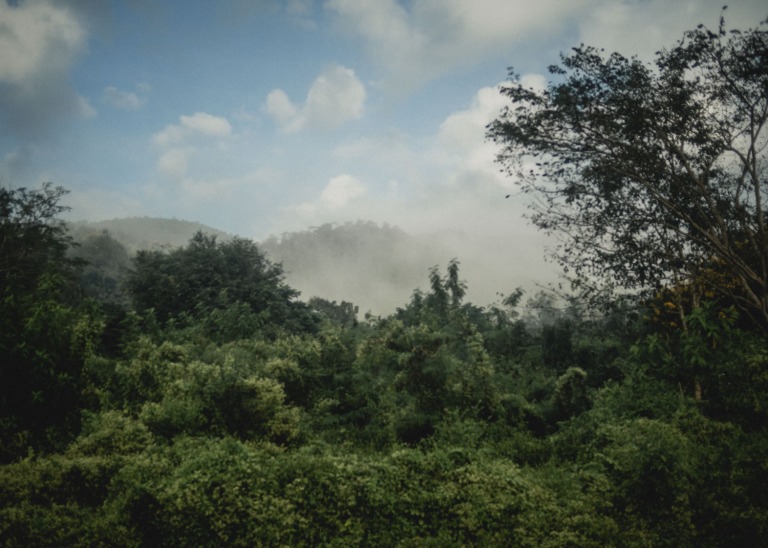 And then we arrived. Back in Chiang Mai after 14 years, our staging point for our next motorbike adventure – this one even longer than the last!