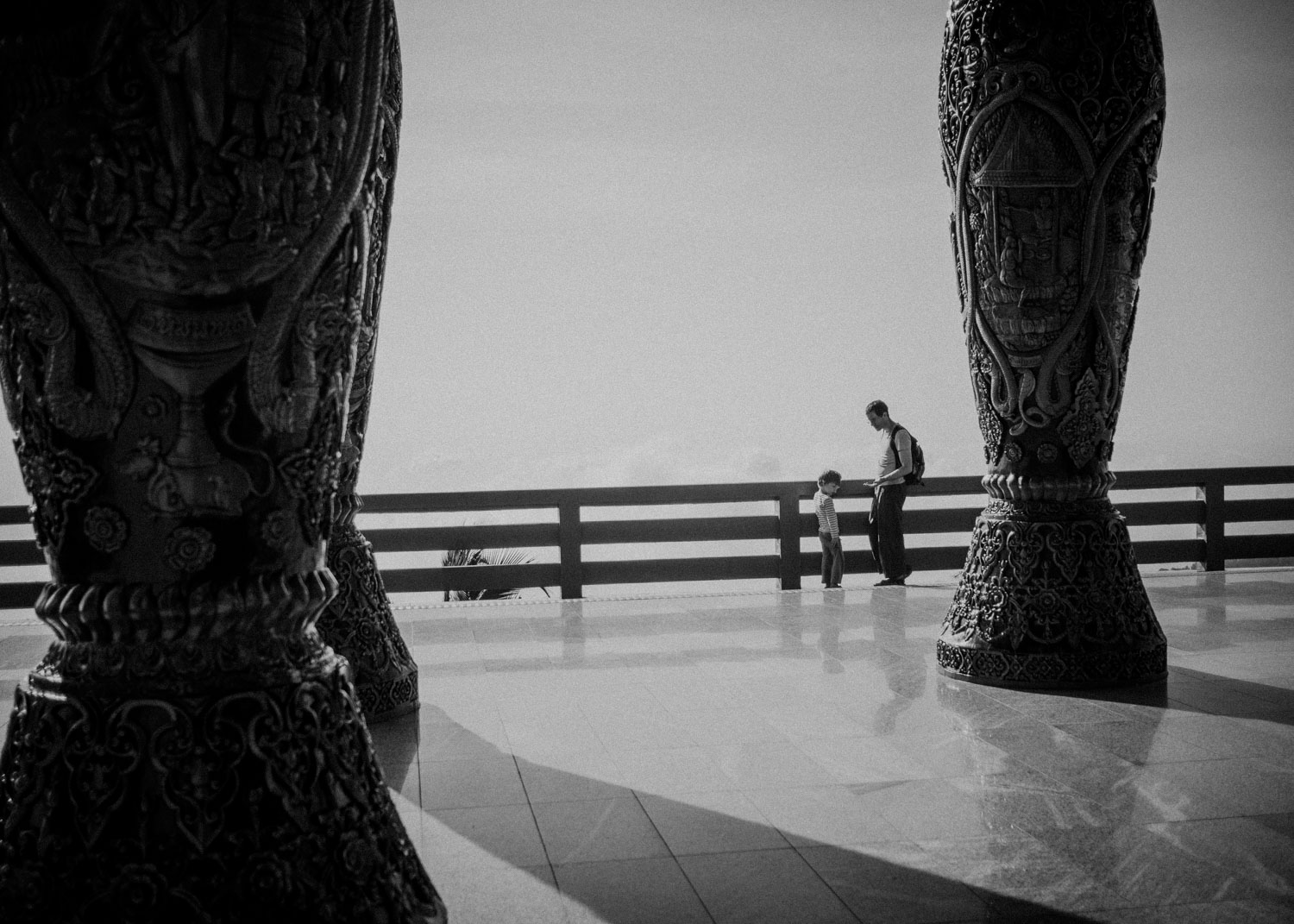 I’ve revisited quite a few places on this trip, and all have changed in the intervening years. To my nostalgic self, the changes haven’t always been for the better. I visited Chiang Mai on my first trip to Thailand with my sister, back in 2000. I enjoyed it so much that I went back in 2003, and then again in 2005. It has been twelve long years since I stepped foot in this city, and once again, I’ve found that much has altered. However I’m happy to feel that the growth and changes in the city are, to me, pleasant ones. Chiang Mai has more life to it than I remember. It feels vibrant, and yes it’s well touristed but not in a seedy, trashy way. This is a cultural hub of a city with a healthy dose of artists, both local and ex-pats, calling it home. It is also a city of temples, with more than 300 Wats, and it doesn’t lack for markets either. If you want space for quiet contemplation, to shop for souvenirs until you drop or gorge on street food until you feel fit to burst, Chiang Mai has your back.

We hired some bikes for the month and took them out for a spin up a long, twisting road to Wat Pra That Doi Suthep, a temple on a mountain overlooking the city. We left early in the morning to avoid the Traffic Police checkpoints that set up along the ring-road around Chiang Mai’s Old City every day. These checkpoints are a bane for tourists and locals alike with police pulling motorbikes over and looking for any reason to issue a fine – the main ones being not wearing a helmet, and not having the appropriate driving license – this one pretty much gets every single tourist. The 500 Baht fine, which provides you with a slip of paper that basically stops you getting fined again for 3 days, invariably goes straight into a back pocket. It is obvious police corruption, but it’s hard to complain because they’re nabbing you for legitimate infringements. Alex and I, driving without proper motorbike licenses, were not keen to pay 1,000 Baht. And so began the daily game of checkpoint avoidance. Our local intel informed us that they set up at three points around the Old City from about 10am-3pm daily. Once set up, they’re difficult to avoid if you need to use the ring road that goes around the Old City, so on our trips out of Chiang Mai we made sure to leave before 9am, and ideally returned after 3pm.

We drove up Doi Suthep in the cool morning air. Halfway up the mountain we came across a lay-by with meat grilling over coals, bags of fruit lining tables and a motorbike cart making fresh brewed coffee. We pulled over. We leaned against a metal railing, sipping iced lattes and chewing meat off bamboo skewers as we looked out at the view spread out below us. Not a bad spot for breakfast. 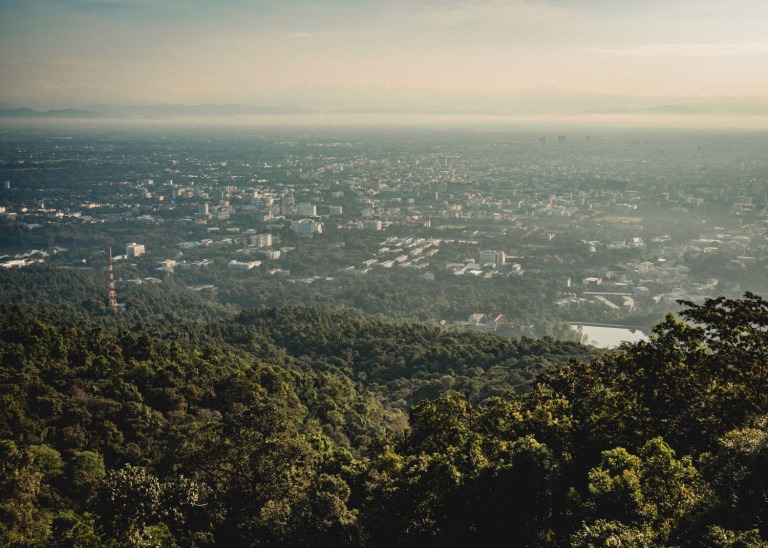 Back on the road with appetites sated, we rounded more bends as we drove upwards and soon we were at the entrance to the temple grounds. We parked up and wandered inside, past market stalls and rosy-cheeked children dressed in hill tribe garb, ready to pose for a photo in return for cash. The naga staircase stretched upwards in front of us, Wat Pra That waiting for us at the top. 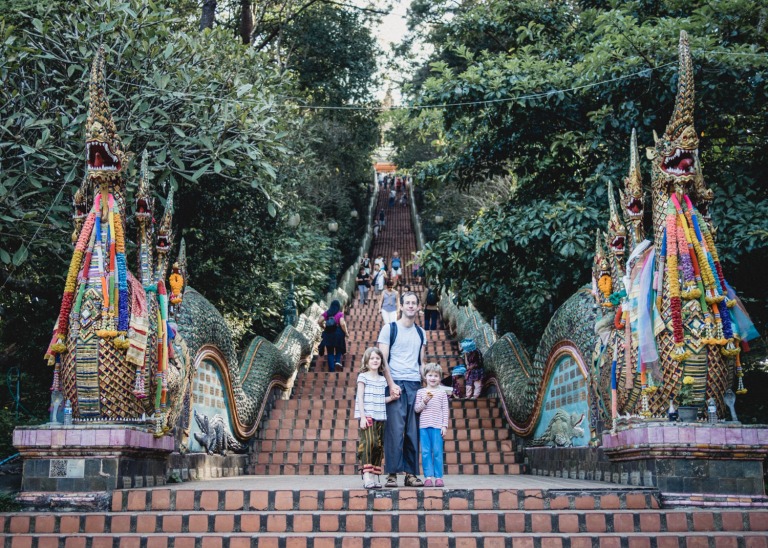 Legend has it that a monk from the Sukkhothai Kingdom of Thailand had a dream. In that dream he was told to go to Pang Cha where he would find a relic. The monk ventured forth and found a bone, claimed to be the shoulder bone of Gautama Buddha. The relic glowed and was able to vanish, move and replicate itself. This magical relic was taken to the King of Sukkhothai, however it showed no magical properties in his presence so he told the monk to keep it, doubting it’s authenticity.

The King of the northern Lanna Kingdom heard of this relic and asked for it to be brought to him. Once the relic arrived in the city that is now Lamphun, it broke into two pieces. One piece was enshrined at Wat Suan Dok in CHiang Mai and the other was placed on the back of a white elephant which was released to wander into the jungle. The elephant climbed Doi Suthep, stopped and trumpeted three times before falling down dead. This was seen as a sign and the King immediately ordered the construction of a temple at this site, which is how Wat Pra That came to be. 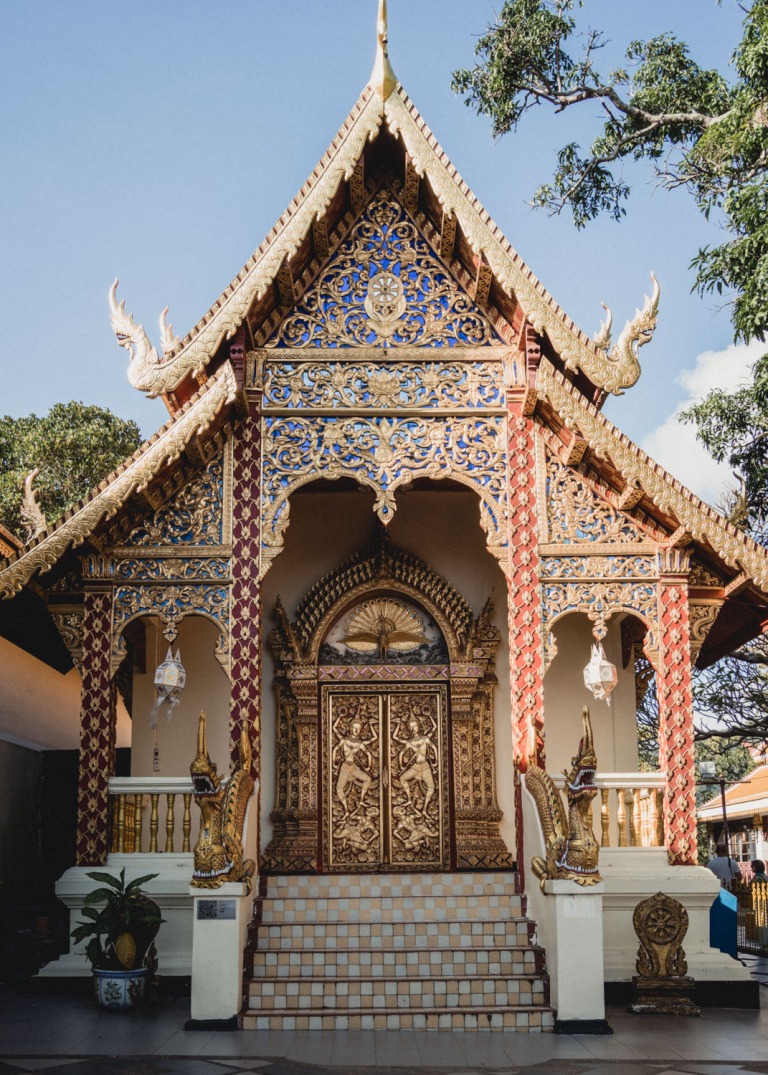 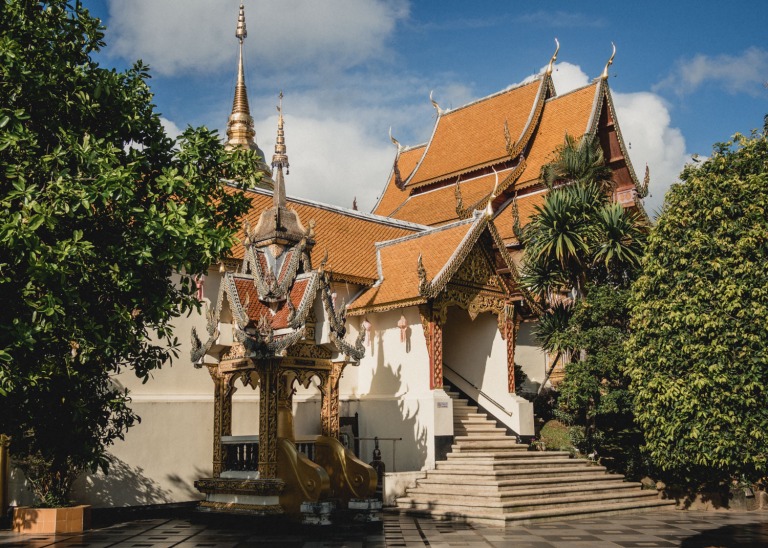 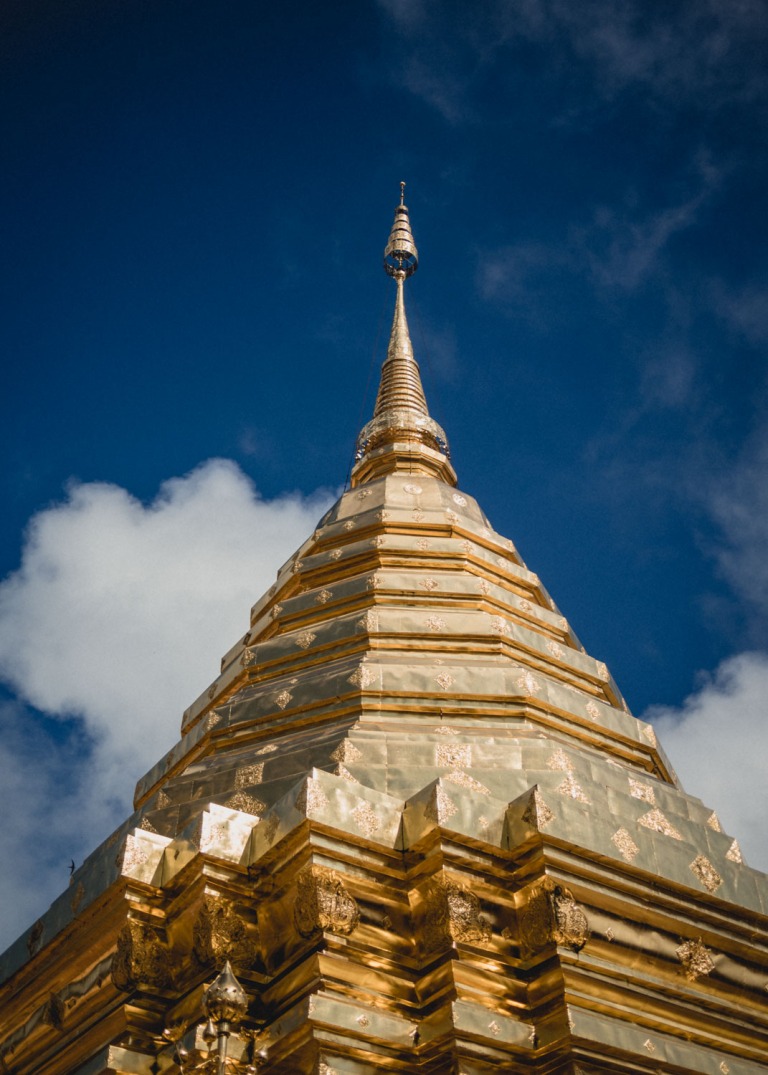 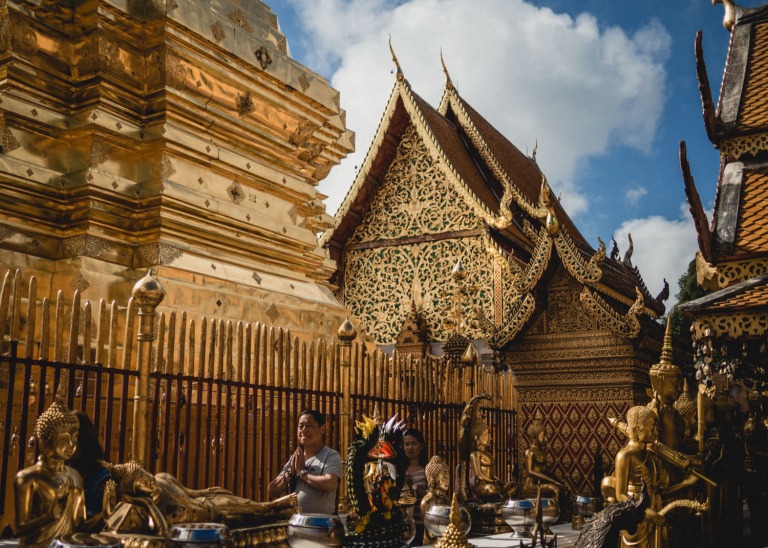 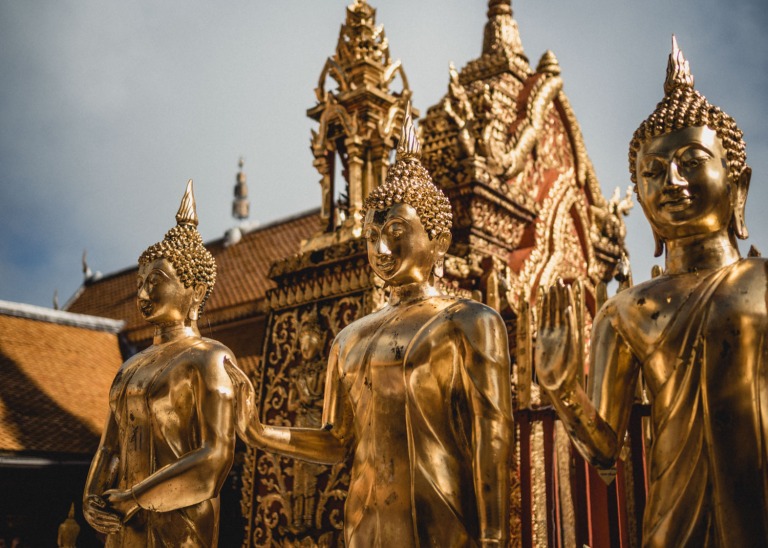 It’s a beautiful temple complex with much to see. Unfortunately Ben, in his own words, was “too tired” and “too hungry” to enjoy it. Or to let us enjoy it for that matter. The constant whining was only assuaged by my deft use of a scarf. Five years old and I’m still finding babywearing useful! 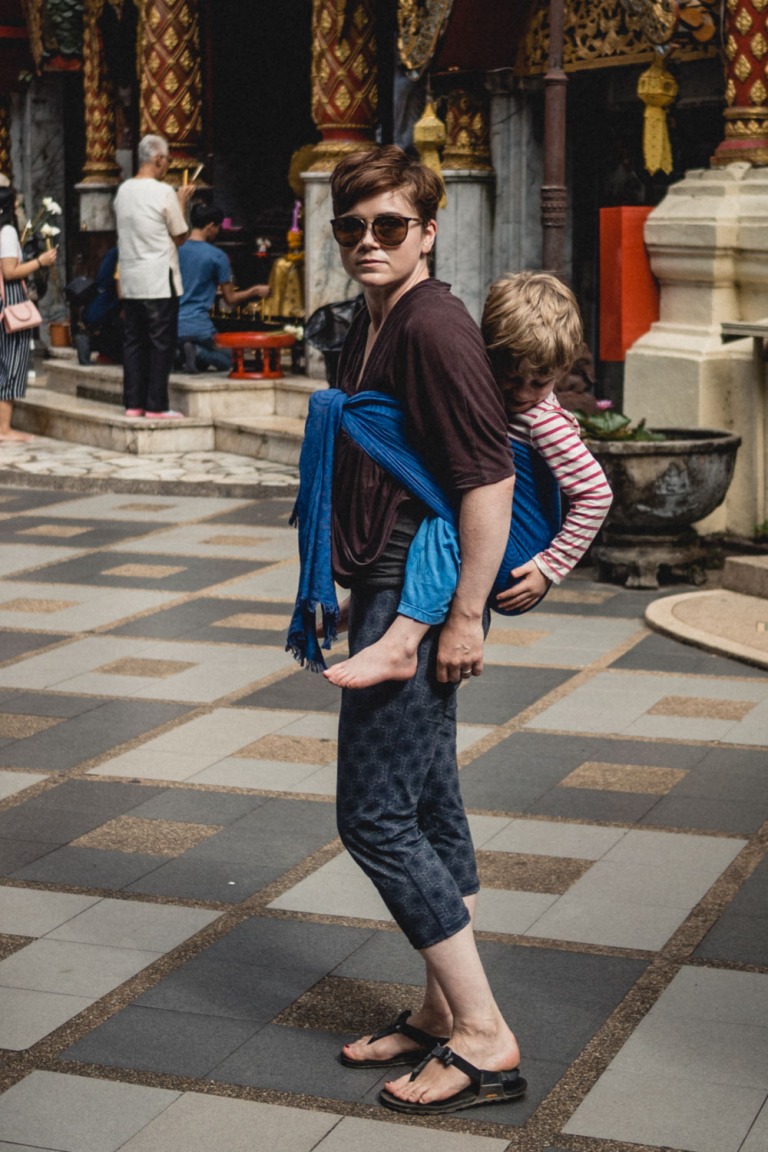 Despite planning to spend the day out of town, we cut the visit short and headed back to Chiang Mai, our tired boy in tow. With the help of Google Maps we made a plan to spend as little time on the ring road as possible, hoping to avoid a checkpoint. Unfortunately the small alleyways we planned to nip down were more vacant lots that through-ways so we were stuck on the ring road longer than we wanted. Sure enough as we rounded a corner we saw traffic slowing down in front of us. Suspecting a checkpoint, we pulled over right away and Alex wandered up the road to assess the situation. Yup, there they were. The only escape route between us and them was an alleyway off to our left being shrewdly blocked by a policeman, allowing no one to pass and diverting everyone towards his compadres up the road. Shit. What to do? We considered leaving the bikes there, walking home and picking them up later. Conveniently there was a cafe right in front of us so we decided to stop in, refresh ourselves and think over our options. We’d resigned ourselves to walking home but when we came out we noticed the escape road was no longer being blocked off. Quick! We hustled the kids into their helmets and onto the bikes then hightailed it out of there before anyone noticed us. Success! Eros Family : 1, Traffic Police : 0

One thought on “Chiang Mai, Round Four.”